Milton Park is a sprawling old house built in the early 1900s with large formal grounds.  The hotel was maze-like to navigate at first and looks like it was last renovated in the 1990s –lots of peach walls, and cream carpets. The rooms themselves were lovely though – we had a forest view room with a queen size four poster, a lounge room with a lovely open fire and a huge spa bath we could’ve swam in! The gardens are very English – green, beautifully maintained lawns, huge 100-year-old willows and weeping beeches, lots of fountains, a rose garden and bluebell woods.

Breakfast was included at the hotel from 7.30am – 10am in the Conservatory. For a hungry pregnant lady who usually breakfasts around 6.15am, this was a bit late. By the time I got breakfast I was starving. The conservatory itself was a lovely spot though, there were huge windows looking out onto the grounds so we could watch the rosellas while we ate, and the space was bright and clean. 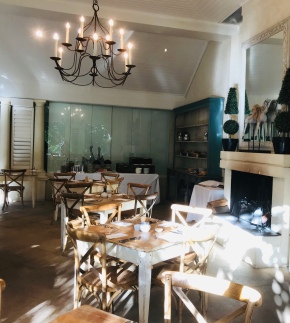 The breakfast itself was buffet style, which usually makes me a bit anxious because of the cross contamination. The first morning we arrived first so I was comfortable to try a few things. When we arrived, a friendly staff member met us and took our coffee order. We chose a table and I had a look at the food options. It was pretty standard with a fruit and charcuterie station, cereals and cooked breakfast in tureens – all self-service. 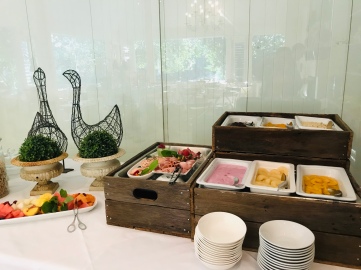 I went for a bowl of fruit, and plated up some scrambled eggs, mushrooms, potato and tomatoes. There was bacon and sausages too but these had been placed on bread to soak up the fat so I didn’t bother with these. When the staff member bought over Michael’s flat white and my decaf flat white, I pointed out I was coeliac and was told there was a gluten free toaster in the kitchen and that the chef would whip me up some toast. Michael also requested some bacon and sausages for me, all of which came out promptly.

It was the first time I’d had a flat white in about 5 months, due to food aversions, but the coffee was very nice, smooth and tasty. The cooked breakfast was nice too, it was all a little bit salty but the bacon was really crispy which I like, and the tomato was herby and flavourful. The gluten free bread was very impressive – I’m not sure if it was made on site but it was good, the texture was light and a little chewy. I was very happy with it. They had a range of fresh fruit out too including raspberries, nectarines, all kinds of melon and kiwi. I had a little of these and they were good but I also plopped a bit of purple yoghurt on them thinking it was blueberry flavoured. It was not though. The yoghurt was a floral, overpowering lavender flavour which was not pleasant at all.

We took a long time over breakfast each morning because the environment and view was so nice, and the service so good. On the second morning, we were told the chef had started placing the bacon and sausages on gluten free bread, although I didn’t actually eat them because I felt a bit overfull after a cooked breakfast. For the rest of our stay, I had a couple of slices of their yummy gluten free toast with marmalade, and a bowl of fruit (sans yoghurt). I also bought my own decaf teabags and the staff happily provided me with hot water for my morning cuppa!

Being a thoughtful and handsome husband, Michael had booked a couple of activities for us in advance. One of these was High Tea at the hotel. We were greeted and told that as guests in the hotel, we could either sit in the restaurant or in the lounge, and opted for the lounge. We settled in front of a fireplace on an old sofa that was surprisingly comfortable, despite the wooden slats and flat cushions!

The staff took our drink order for a flat white and earl grey tea, and after a short wait came back with our drinks and two huge plates of sweet and savoury treats, regular for Michael and a gluten free plate for me.

The sandwiches were made with the same yummy gluten free bread as my breakfast toast. Uncooked gluten free bread can often be hard and unpleasant to eat however, this was soft and enjoyable. The sandwich fillings were fairly standard for a high tea – cucumber, ham and tomato, and turkey and avocado. There was a little slice of pumpkin and mushroom frittata too, the mushroom flavour was delicate but delicious and the texture was good. Frittata’s can often be soggy, particularly around the vegetables, however this was nice and firm.

There were a good amount of tiny sweets on the plate too. There was a chocolate tart, a berry crumble, a citrus macaroon, coconut mousse, banana bread and a weird chocolatey cheesecake/jelly type thing.

The citrus macaroon was tangy and sweetened by the coconut, and the coconut mousse was very delicate and refreshing. It made for a nice little palette cleanser. The weird little chocolate cheesecake/jelly thing was also good. The texture was strange, and it was hard to eat but it was very chocolatey and contained bits of nut. It was very enjoyable. The stand out on the high tea was the banana bread. I don’t eat it very often because gluten free banana bread is usually rubbish. This time though, I could’ve been eating regular banana bread. The texture was firm and the banana flavour was strong. There wasn’t too much sugar in it and it was really good. I was really impressed.

We spent two and a half hours, slowly eating and chatting over high tea. It was a lovely relaxed afternoon and well worth it. It came to $93 for the two of us.

On our anniversary, Michael had booked dinner at Horderns – Milton Park’s fine dining restaurant. Horderns is a small dining space next to the Conservatory. It’s a square room facing a huge weeping beech in the garden (the oldest in the Southern Hemisphere I believe). The décor is warm and cosy. As our anniversary fell on the Thursday night, the restaurant was empty with only two bookings while we were there – us, and two other hotel guests. On the Friday night, we headed past Horderns and a lot more tables were taken.

The staff member was incredibly friendly and accommodating. We had notified the restaurant of my dietary requirements when we made the booking and I reminded the staff member as we looked through the menus. She knew the menu well and was confident about what was gluten free, what could be amended to be gluten free, and what couldn’t be changed.

After our mega high tea we decided we’d just get two courses. Michael ordered the ling fish to start with beef wellington as a main, and I went for the wild mushroom starter and cod as my main. We also ordered some duck fat roasted kipflers and Michael had a glass of southern highlands red wine, while I had water.

Before our starters came out, we received an amuse bouche each – Michael’s was a non-gluten free fried wagyu short rib and I had a goat’s cheese and beetroot roulade. The roulade was really nice, the texture was firm and the umami of the goat’s cheese was satisfying. 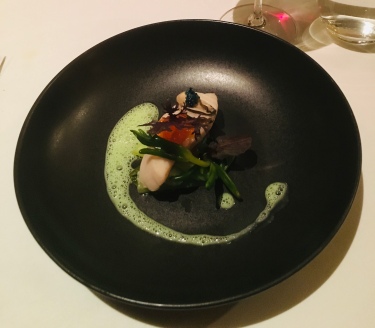 Our starters came out shortly afterwards. Both were gluten free and prettily plated. Michael’s ling was delicate and soft, cooked nicely but not overly memorable. The wild mushrooms were basically a mushroom bruschetta. The same, nice gluten free bread was the base, piled high with wild mushrooms, a little citrus and a mushroom foam. It was obviously very mushroom-y, and I enjoyed it.

Our mains came out after a short wait. Michael’s beef wellington was not gluten free and unfortunately, it was disappointing. Although the beef was perfectly cooked rare, the pastry was undercooked in places and the dish was very salty overall. My cod was better than the beef wellington but nothing outstanding. The cod was light and nicely cooked although the skin was not crispy. It came on a bed of sauerkraut and apple slices which were a good complement to the fish. The accompanying sauce was light and creamy. Our kipflers were nice and crispy, and came with a tasty aioli on top.

The service at Hordens was really good but the food was a little disappointing, particularly as the cost for the two of us was $218.00 for two starters, two mains and a glass of wine. I don’t doubt the quality of the food but I think the plates themselves were a little bland and missed the mark.

On our last full day in Bowral, we booked a few hours at a nearby spa in the Gibraltar Hotel (I highly recommend this) but before heading there, Michael had organised for a picnic lunch. We collected our picnic basket from the hotel reception and luckily had a quick look before we took off into the grounds as it was not gluten free. We explained to the reception staff and after a 15 minute wait in one of the lounges, the chef brought out the correctly made picnic – gluten for Michael and gluten free for me. He apologised for the mix up, explaining that there had been a lot of dietary requirements that morning and we headed out into the grounds.

We choose a sunny spot on the lawns, near the rose gardens, put down the blanket and spent a leisurely hour and a half nibbling picnic food, reading and doing crosswords! The gluten free options were similar to the high tea. The sandwiches were the same and there were seven little sweets – two lemon cheesecakes, two small banana petit fours (made from the same amazing banana bread), two chocolate cheesecakes and the coconut mousse from the high tea. I also had a selection of fruits – raspberries, blueberries, melon and nectarine.

The picnic was lovely, partly because the grounds and weather were so nice but it was a reminder that although the gluten free food at the hotel was very good, we did need to be diligent and remind staff about my requirements.