In mid-April, Michael and I celebrated our 5-year wedding anniversary with a three-night stay in Bowral.

On the way to Bowral, we stopped at Oliver’s in Goulburn. I wrote a short review of Oliver’s last year when we headed to the 2018 Sydney Gluten Free Expo that you can read here. They still have a decent range of well labelled gluten free options and this time I grabbed a seasonal garden salad with free range chicken breast, and Michael had a non-GF chicken sandwich. We shared a gluten free chocolate brownie and a bottle of apple, orange, mango and passionfruit juice.

Michael’s sandwich was pretty average but I was happy with my salad. It was very filling and it contained heaps of different vegetables – salad leaves, capsicum, carrot, beansprouts, tomatoes, fetta, edamame, cucumber, celery, avocado. It also contained a little tub of seed mix with sesame seeds and other bits and a little tub of Caesar dressing which helped the salad with a bit more flavour. The number of veggies made me feel healthy which was nice because I topped off lunch with a brownie! 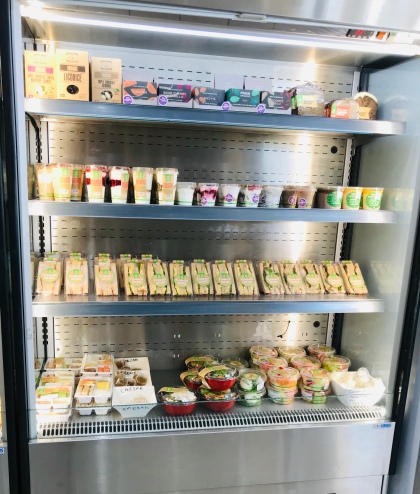 ome of the food range

The brownie was very chocolatey and there were some big pieces of walnut in it which added some crunch. The texture was good, firm but still soft although it was slightly oily. The juice was sweet and very mango-y which I liked. Overall our lunch cost $32.65, a bit pricey but I was impressed with the gluten free range.

We cruised into Bowral around 2pm and headed up to Milton Park Country House Hotel and Spa, a 5-star hotel in the Southern Highlands, a short 10-minute drive outside the town.

We spent a couple of hours floating round the hotel enjoying doing nothing, then around 5.30pm we drove back into Bowral to the Royal Hotel for dinner. We walked through the main bar to get to the restaurant and there was a marked difference between the ‘local’ drinking area and the casual but modern restaurant.

The décor was all creams and browns, with lots of cow hide cushions. There was an old-fashioned fireplace in the middle of the room and it was a comfortable environment. We were seated quickly along one of the walls by the very friendly staff. This was a little before 6pm when the place was almost empty, but by 6.10pm the restaurant was almost full! 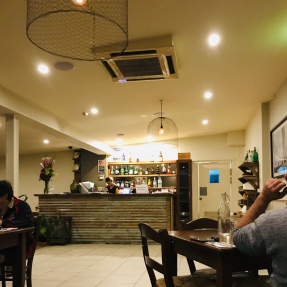 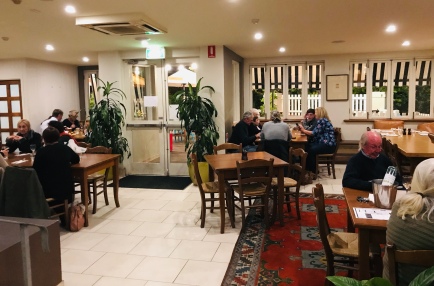 The staff were busy but happy to listen to my dietary requirements and consulted the kitchen for information for me. They confirmed that although the kitchen could not guarantee a gluten free environment, they would try their best to avoid any cross contamination. I ordered the crispy skin salmon and an orange juice, and Michael ordered the 300g rump steak and a schooner of Stella.

The steak came with chips (non-GF) and salad, standard pub food – Michael said the steak was cooked rare and pretty good. The salmon was a bit boring, the skin wasn’t crispy and the smoked tomato butter had no taste at all. The green vegetables (English spinach, asparagus and bok choi which had been labelled as ‘Shanghai’ on the menu) were very nicely cooked, although the plate ended up swimming in vege water. The meal filled a hole but it wasn’t anything special. It came to $61.51 and although we wouldn’t rush back, it’s nice to know that there’s a casual, gluten free dinner option in Bowral.