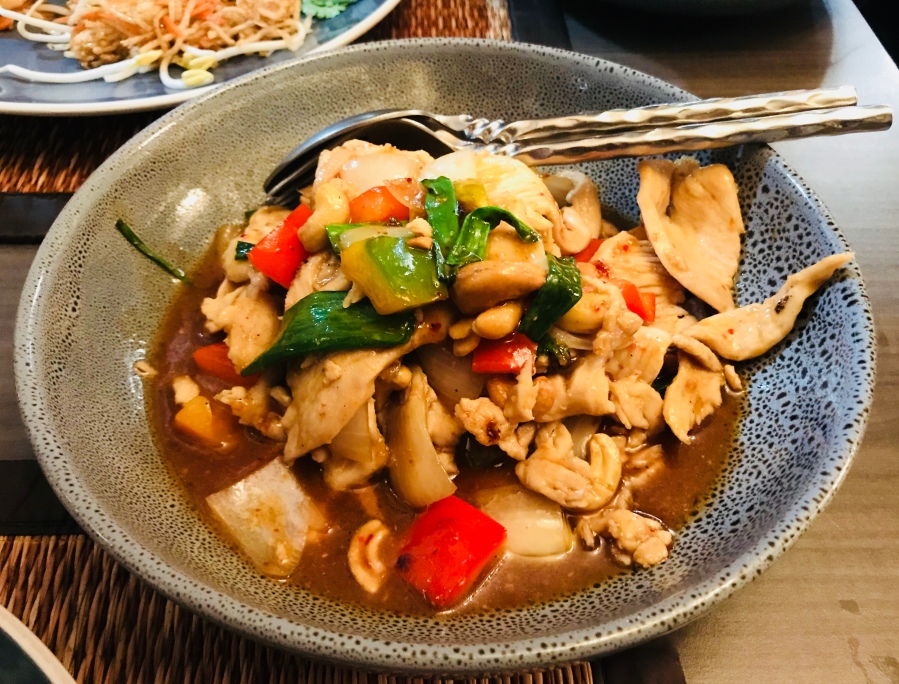 Last Wednesday Michael and I headed to Queanbeyan for pub trivia. Knowing that I wouldn’t be able to eat at the pub, we decided to get an early dinner elsewhere and I left it to Michael to find somewhere to eat.

Michael found Lime Leaves Thai Restaurant online and it had some positive reviews, including one from a coeliac. We headed to Queanbeyan and arrived around 5.30pm.

Lime Leaves is in a heritage building and it’s a lovely setting. The building is set back from the road, fenced in with a little garden. The building is painted white. It was dark when we arrived but in sunshine I’m sure it would look quite charming. When you first walk into the restaurant you come straight to a counter which isn’t particularly inviting, but further into the space the restaurant is homely and comfortable. The walls are dark with white trim, and dark laminate flooring. The space had pleasant mood lighting so it’s not too dark. There are some interesting Thai style photos on the wall and a Buddha sitting above a fireplace.

There were only a few tables taken when we arrived but the place promptly filled up. We were seated quickly by a window and browsed the menu. The gluten free items were marked well and in the back was a nice little explanation of the ingredients used in the dishes. 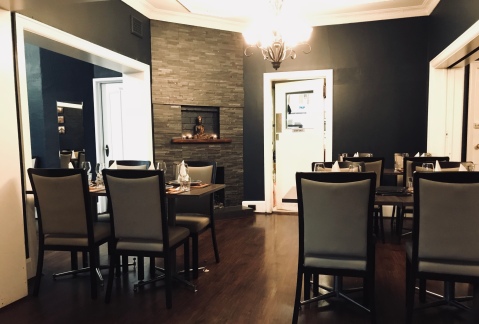 After a little while looking over the menu, a staff member came over to take our order. Straight away I explained that I was coeliac and that I needed uncontaminated, gluten free food. The staff member took this all in his stride, barely batting an eyelid. We ordered the satay chicken entrée, the Mee Grob, and Chicken Pa Med Mamuang, with a coconut juice each.

The satay chicken came out first and in good time. There were four chicken tenderloins which were very well cooked and marinated in a sauce that tasted very faintly of coconut. The satay sauce was served on the side in a shot glass. The satay was peanutty but mild. There wasn’t any heat or flavour (other than peanuts) in the sauce and it needed something more, some chilli, lime or coriander for example.

We ate our entrée and it was cleared away in good time. However, it was a long wait between the entrée being cleared and the mains coming out. Eventually the Mee Grob came out, followed by the Chicken Pa Med Mamuang, five to ten minutes later.

The Mee Grob was described in the menu as a crispy noodle dish in an orange and butter sauce with chicken and prawns. The crispy noodles had a great texture. I found it really satisfying to eat something that crunched when you bit into it but this was pretty much where the positives ended. The noodles were incredibly sweet, and not particularly orange-y. The sweetness was overpowering and underlined by the pervasive taste of spring onion. A further disappointment was that the prawns were overcooked and rubbery, and they’d skimped on the chicken. It was almost undetectable. 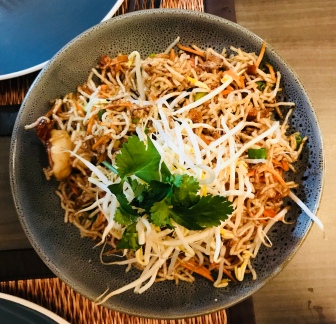 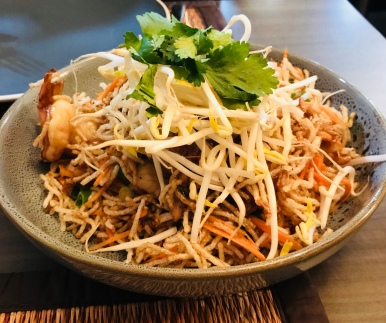 The Chicken Pa Med Mamuang was chicken and cashews in a mild chilli jam – a dish we regularly order when we get Thai food. This time though it was disappointing. It was another very sweet, onion-y dish. There weren’t any other flavours, and it would’ve benefitted from some fish sauce or lime to counter the sweetness. Although there was a lot of chicken, there were hardly any cashews, or other veggies.

The mains were sickeningly sweet to the point that, when the staff came over to check how the meal was going, Michael requested some chilli powder from the kitchen to add to each dish. To round out the sugary meal, we had also ordered a coconut juice each. Usually sweet but refreshing, the ones at Lime Leaves were… just sweet.

We finished our food and headed to the counter to pay. As we were paying, the staff member who had bought us the chilli powder, asked us about the meal again, and said that they usually served the Mee Grob with a curry. However, at no point was this said to Michael and I when we ordered our food, and it felt like the staff member was trying to excuse what was really unseasoned food.

The total cost was $62.70, which was a bit steep considering how disappointing it was. Overall, we won’t be returning to Lime Leaves. While the place looked lovely, the food lacked the balanced flavours I expect from my Thai food.

Welcome to Get Behind Me Gluten! You’ll find a range of topics on this blog regarding coeliac disease for your entertainment – info, research news, restaurant and product reviews! Comments are always appreciated so leave a message if you have any feedback!
%d bloggers like this: