For the second weekend in a row, I found myself in Braddon looking for brunch.

Michael, Milly and I headed into Civic last Saturday hoping to get something to eat at Cream. I’d checked online before we left the house for their opening hours which said they were open from 7am until late. Unfortunately, when we got there, Cream was closed so we decided we would head into Braddon to see if we could find somewhere nice.

We strolled up Lonsdale Street thinking we’d have a look at 80/20 and we were pleasantly surprised to find an outdoor table being cleared away when we arrived. Michael went inside to pick up some menus while I sat at the table and waited for it to be cleared away. The staff member was very accommodating for us, wiping the table for us when I asked, and putting up an umbrella to protect the baby from the sun. 80/20 also has high chairs which I grabbed one of, although it was pretty grimy and I had to wipe it over.

The menu at 80/20 looks quite interesting. Their ethos is based around clean, natural wholefoods and the idea that if you are mindful 80% of the time, you can indulge yourself the other 20%. They have a lot of food that is allergy safe – with gluten and dairy free, vegetarian and vegan options. They also do a range of raw desserts, that looked really good and were labelled nice and clearly.

We had a look over the menu (which was also very well labelled) and said to notify staff of any dietary requirements, and I headed into the café to order.

And the wait began. The queue to order was long, winding between the tables with more than 10 people in it. In their defence the ordering system was offline so they were handwriting orders, but from previous visits it still gets very busy during peak brunch hours.

It wasn’t too bad though as it meant I could have a good look around. The café is long and rectangular, with a curved wall and window at one end. There are windows along one side and the kitchen and counter are opposite. The walls are shiny black tile and they have one white wall, covered in indoor plants. There are wooden tables everywhere with little black stools. Despite all the black, it’s a nice light space although a little cramped by all the tables. It was extremely loud though because of the sheer number of people. 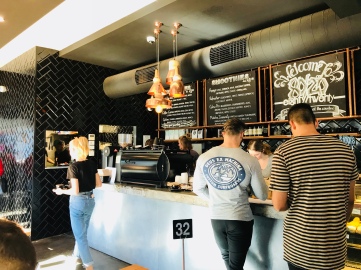 Next to the coffee station there was a glass cabinet containing nibbles like raw balls, slices, and cakes. These were all clearly marked for allergies and I would definitely go back to try some of these, like the mars bar slice. 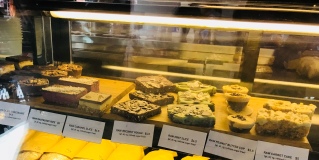 Eventually I made it to the front of the queue to order. The woman behind the counter was really friendly despite how busy it was. She took my order for two skim flat whites (one decaf), a baby chino and the green pea and avo plate with extra bacon for Michael, toast with honey for Milly, and the breakfast wrap for me.

As I ordered I explained I was coeliac, and the staff member was great. She let me know that the breakfast wrap was actually with toast when it was gluten free (rather than a tortilla which was a little disappointing) and confirmed there was no cross contamination without me having to ask.

As she was tallying up my order though, another member of staff came up. Rather than waiting for her to finish serving me, the other staff member interrupted and apparently swapped shifts midway through my order. She then proceeded to act pretty rudely. No greeting, no manners, literally just telling me the sum figure for my order ($54.10) then ignoring me and asking the woman in the queue behind me what she wanted.

This was pretty disappointing. The service and behaviour of the staff at 80/20 had been exemplary up to this point. I don’t think my expectations are unrealistic but I think a ‘hello’ and ‘thank you’ are just basic manners.

I rolled my eyes and went back out to the table to grumble to Michael and wait. As I said, it was pretty busy so I expected a bit of a wait and that’s what I got. Our coffee came out after about 10 minutes and the food, another 10 minutes afterwards. 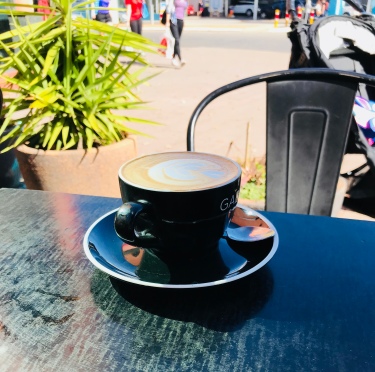 Michael’s coffee was pretty average too. The taste was ok but it was also a bit cold. The other criticism Michael had was the length of time between coffee and food. He hates to finish his coffee before the food arrives and because the wait was so long, we were both done with our coffee’s, and Milly had finished her babycino and was getting restless.

When the food did come out it was good though. The baby (and Michael) were happy with the toast with honey. I ordered it on sourdough based on the advice from the staff that it wouldn’t be too tough for the baby and Michael said it was really satisfying to have something so simple but delicious, particularly as a nice slice of bread with honey is a rare occurrence in our gluten free home.

The green pea and avo plate was good too. Michael described it as like eggs benedict but with the pea and avocado instead of hollandaise. The smashed pea and avo was sweet, and the pickled radish was nice but needed a stronger pickle flavour to cut through the creaminess of the pea and avocado. The poached eggs were very well cooked and the extra bacon was smoky and salty. 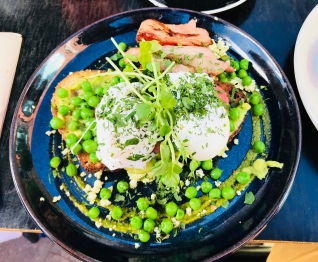 When the breakfast wrap came out, I was pretty impressed. It was a large portion and had been quite nicely plated to look like a mountain!

It was like a regular big breakfast containing toast, bacon, eggs, tomato, sweet potato hash and BBQ sauce. There was a lot of toast and the bread was nice – I believe it was from La Bakehouse Exquisite although I didn’t confirm this. As there wasn’t any butter, the slice on top was a bit dry while the slice underneath has gotten all the BBQ sauce on it. 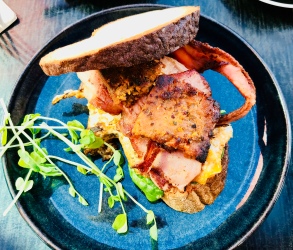 The bacon was crispy and smoky especially where the fat had been cooked to form crackling. The eggs were fried with the yolks semi-hard and creamy. The sweet potato hash was a strange flavour that did not go particularly well with the other components of the meal which was a little disappointing. I couldn’t find any tomato in the sandwich/wrap but the homemade BBQ sauce was tomato-y and very tasty. The sauce wasn’t too sweet but there wasn’t really enough of it. I got little bursts of it occasionally which was quite nice.

It’s good to have a place to go where I can eat without having to worry and explain my coeliac requirements. The majority of the staff were very friendly as well as knowledgeable, and the food was reasonably well executed. Plus, I’d return to try some of the sweets!