After weeks of being at trapped at home either being sick or looking after sick people, I finally escaped the sick house to meet a friend for brunch and gossip! While the company was spectacular, the venue was disappointing.

We headed to Elemental in Braddon a little after 10am. It had been a pretty long time since I last went to Elemental, well over a year in fact. I had expected it to be rammed when we arrived but there were empty tables inside and outside, with only a few taken. I guess this was the first sign that it wasn’t the same venue as it was the last time I was there.

My previous experiences at Elemental had been pretty positive. As a paleo café, the staff had a reasonable knowledge of my dietary requirements and it had an interesting menu. Although the staff are still friendly, they looked a bit scared when I mentioned my coeliac requirements and the menu is completely different. There’s no way that they’re a paleo café anymore.

When we arrived, we decided to sit outside to catch the last few rays of summer sunshine and after a few minutes catching up, I went inside to grab menus. This took a bit longer than it should have because they were not displayed very obviously, tucked up on the front counter and couldn’t been seen when there was a queue of people ordering food. On the plus, this gave me a bit of time to have a look at the décor inside the café.

When you walk through the front doors, the coffee station and counter is immediately to the left. It looks a bit clogged up with various pastries piled up and the large till and it doesn’t take a lot of people for the queue to poke outside the front doors. 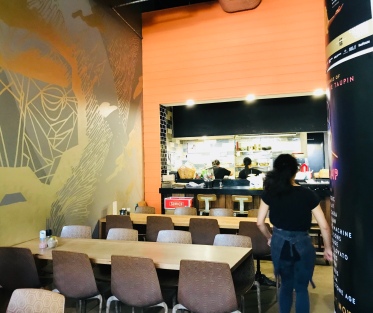 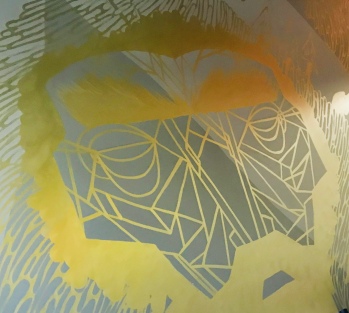 There are a few long tables and smaller wooden tables dotted through the room and the left wall is decorated in grey with a large, gold painted foxy, beardy face. The kitchen is in the back of the room and it’s nice and open. The décor made me think of trendy cafes in Melbourne.

Eventually I managed to get hold of two menus and took them outside to look over with my friend. The menu is significantly different to the previous menus. The paleo theme has gone out of the window completely to be replaced with standard café fare – big breakfasts and French toast for breakfast and toasted sandwiches for lunch. I don’t eat paleo, but I was a little disappointed because paleo cafés are usually a safe bet for coeliacs. Still, they had a lot of items marked as gluten free.

I headed back inside to order. I went through my usual explanation that I needed gluten free food and no cross contamination. The staff member I spoke to looked a bit scared when I told her what I needed but was very friendly. She said she would talk to the chef for me about my toast and let him know I was completely gluten free. I ordered the eggs benedict with smoked salmon and a large decaf skim flat white. Then headed back to the table to wait while my friend ordered.

After about five minutes, the staff member came out to ask me again about my dietary requirements. She said there was milk and wheat in the hollandaise sauce, which I thought was a bit weird, so I asked to have a word with the chef myself. We went to the kitchen where the chef handed me a carton of premade hollandaise.

I found this pretty off-putting for multiple reasons. Firstly, the eggs benedict was identified as ‘gluten free available’. Eggs benedict without hollandaise are just eggs on toast so the menu was misleading. Secondly, packet hollandaise?! Maybe I’m being a snob, or I have been spoiled by the Canberra café scene but I expect my hollandaise to be freshly made with eggs, butter and lemon, not poured out of a carton.

Although I found this disconcerting, the staff and chef were really friendly and apologetic. When I said I’d like to change my order, they said it wouldn’t be a problem. I ordered the basic breakfast instead and was refunded the difference. In total, I paid $19.50 for my coffee and basic breakfast.

We didn’t wait for long for our food and coffee to come out. The coffee was good. Despite ordering a large, it wasn’t weak, and was nice and smooth.

My friend had ordered the smashed avocado which was good. It looked pretty, particularly with the pomegranate seeds.

The basic breakfast was as described – two poached eggs, bacon and a slice of the gluten free toast. It looked a bit sparse on the plate and some butter would’ve been nice but it was well executed. The eggs were perfect spheres with a good runny yolk. The bacon was nice and crispy, and it had been fried so that the fat along the edge was crunchy, plus there was a lot of it. They were a bit tight with the toast, there was only one slice of what I think was Deeks bread – though they didn’t charge extra for gluten free bread. I did ask the wait staff where it was from and she said she’d find out for me, but unfortunately, she didn’t come back and tell me.

I won’t be returning to eat at Elemental any time soon, although I’d get coffee there again. The food was well done and the staff were friendly but I couldn’t help but feel disappointed. I had expected slightly hipster, paleo food – I mean, we were in Braddon – but what I got was more suited to a greasy spoon. The food marked as gluten free on the menu wasn’t actually gluten free, which is a big negative for me and the carton hollandaise was quite off putting, wheat or not!