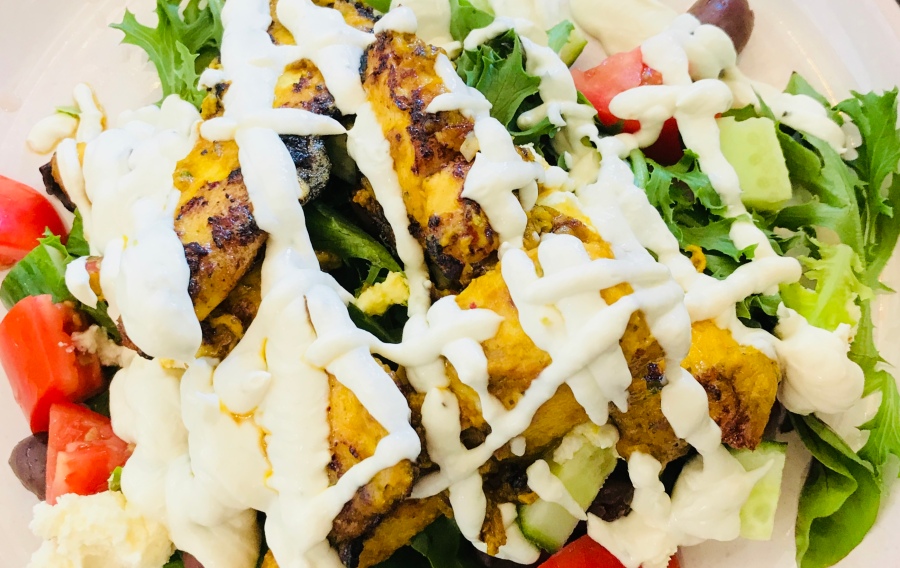 Last Saturday, Michael, Milly and I headed into Civic and went to Gus’ Place for lunch. It’s been a really long time since I’d last been to Gus’ – in fact, it’s been about 4 years. After a couple of pretty rubbish meals (including being served undercooked calamari) we stopped going to Gus’. But after the long shutdown and refurbishment under the new owners, we decided it was worth another shot.

We arrived around 11.30am and the place was quite busy. The gazebo, which faces Bunda Street, only had two empty tables and the outdoor seating down the alley into Garema Place had a good number of people sitting and enjoying the sunshine.

We decided to sit in the gazebo. The outdoor seating is famous at Gus’ because it was the first place in Canberra to introduce outdoor seating in the 1970s. The gazebo is quite lovely to sit in – like being in a greenhouse. There are lots of green plants and in the middle, and there’s a tree growing up through the roof. The tables are a bit squashed in but the chairs are comfortable. There was a nice smell of coffee in the gazebo and it was quite loud with Taylor Swift playing and the sound of so many people.

From our table, we could see into the newly refurbished interior and it looked really nice. There’s a lot of wood panelling and an island in the middle where the drinks are prepared. In the sun, the whole place had a light, airy feel.

The table we sat at had been cleared but not wiped over. We sat for slightly longer than comfortable trying to get someone’s attention and eventually I got up and grabbed a couple of menus to look over before anyone came over.

When the staff did come over, she was nice. She wiped over the table, apologised for the mess and fetched a high chair for us. When I said to her that I was coeliac, she didn’t know what that meant but once I explained the gluten and cross contamination issues she was happy to help. She explained that they only had one toaster and the kitchen was small but she said she’d talk to the chef about my requirements once she’d taken my order.

Knowing that I wasn’t going to be able to have safely prepared toast, this cut my food options down a lot. The menu had some really interesting looking stuff on it but a lot of it had bread that, if left off, would’ve meant a very small and disappointing meal. For example, the shakshuka sounded good but would’ve been a bit measly without the bread to mop up the tomato and egg yolk!

In the end I settled for the warm chicken salad (the only option marked ‘GF’ rather than ‘GFO’) with a decaf flat white. Michael ordered the Rueben with a flat white and we got the kids chicken nuggets and a babycino. When the waitress took our order, she confirmed she’d have a chat with the chef for me, and she returned a few minutes later to confirm the chef would do everything possible to avoid cross contamination.

After a short wait, our coffees came out. I was happy with my decaf, it was nice and smooth, and Michael was happy with is regular flat white although he described it as being like ‘unsweetened coffee flavoured milk heated up’.

Our food came out shortly after. Milly was happy with her chicken nuggets, chips and tomato sauce. Michael had ordered it because he couldn’t order children’s nuggets himself. He said they were good, rubbery like a good chicken nugget should be.

Michael’s Rueben was tasty, but a bit weird. Instead of pastrami, the meat was pulled beef brisket, and the cheese was bright yellow, possibly an old fashioned ‘plastic’ Kraft cheese slices. There were only three tiny slices of pickle and not quite enough sauerkraut. It had also been put together with all the meat on one side and most of the sauerkraut on the other. Michael described it as more like an ‘homage to a Rueben’ than a real New York-style sandwich. However, he also said that despite being really weird it was actually quite nice. 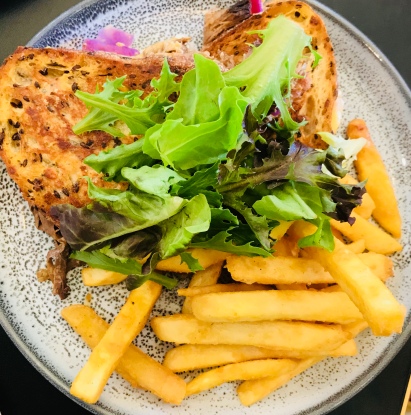 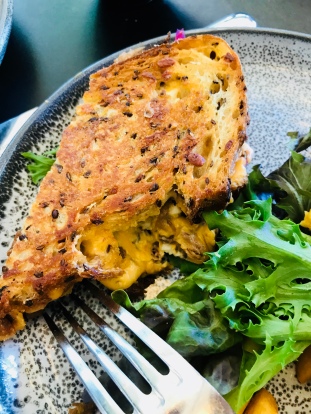 My warm chicken salad was also weird but nice. The chicken was described in the menu as ‘Moroccan grilled’ and it came out coated in a thick yellow marinade. This was very sweet, and tasty but I couldn’t discern any typical Moroccan flavours like cumin, paprika or coriander. Based on the colour, I’d guess there was some turmeric but other than sweetness I couldn’t taste much else.

There were tomatoes and cucumber in the salad as well as olives. The olives were mild which was disappointing because I like a strong flavour, but there were lots of them. There was a lime aioli on the salad which was very creamy but I couldn’t detect any of the lime. They were also a bit tight with the fetta which was delicious – tart and smooth. Although the salad was not what I expected, it was quite tasty. The flavours were good together and the chicken was perfectly cooked and came out warm. 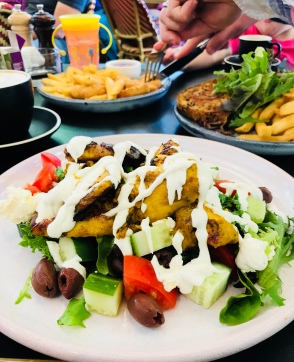 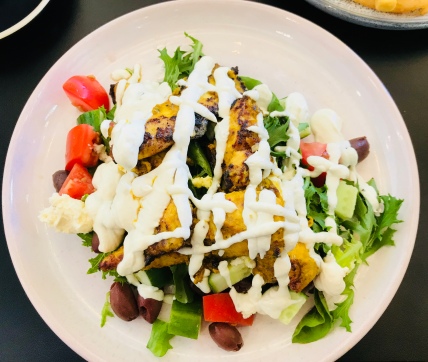 Our lunch at Gus’ was good but strange. The staff were very accommodating and the cost was reasonable, totalling $57 for three drinks and three meals. The food was tasty, although not what we expected, but unfortunately there just aren’t enough safe options for me to return there to eat.