Deeks Bakery and Café has been on my list of places to visit for a while. I’ve said in previous posts that I’ve had Deeks bread before at various cafes and restaurants and I was given a couple of sweet loaves at the Sydney Gluten Free Expo last August.

The Deeks website promotes its products as part of a healthy lifestyle and all of their products are gluten and grain free. It includes a bit of background on how their products are ideal for coeliacs and people with compromised auto-immune systems. It also goes on a bit about a paleo lifestyle, which isn’t really my cup of tea.

A few days before going to Deeks, they posted a link on Facebook about a delicious looking hazelnut wafer cake! It looked so good I shared it and it sealed the deal for me – it was high time I ventured to the south side and reviewed the Deeks Bakery and Cafe!

We drove across town to get to Deeks. This was a half hour drive to Pearce and by the time we arrived, Michael and I had spent the whole journey singing nursery rhymes to a grumpy 16-month-old. By the time we arrived we were ready for coffee and cake. Despite living in Canberra for his whole life, Michael had never been to Pearce so we didn’t know what to expect. We parked around the front of the Pearce shops, there were plenty of parks as it was 9.30am.

We walked across the square towards Deeks and we weren’t filled with hope. From the outside, the Pearce shops are not inviting. In fact, I couldn’t tell you what was there except Deeks. There was a big concrete square at the shops, with a smaller square sectioned off by Deeks barriers. There were a couple of tables set up outside but there wasn’t any shade and it looked miserable. All concrete and no character.

We headed up to the door to Deeks, not sure about what to expect. Inside Deeks is a bit strange. Immediately opposite the door is a glass cabinet containing a mix of sweets and savoury items, the kind that you find in a bakery. There are a couple of small square tables against the window. Along the left wall there was a service counter and behind this were cubes containing a variety of Deeks breads.

Products behind the till 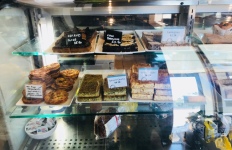 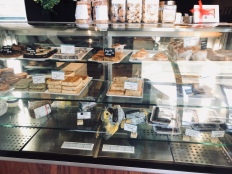 Opposite there was another set of cubes showcasing the Deeks Valentines specials and items like pasta and flours. This was set up parallel to the front of the building where the door and window were, and it basically cut off the back of the café where an eclectic mix of chairs and tables were set up.

The seating area contained an old fashioned, round wooden table with four chairs just behind the cubes. In the middle there were a couple of big, old leather sofas and at the back there was a long, contemporary table.

There are mirrors, and black and white pictures dotted around of “Deeks’ or Francois Robert “Rob” de Castella – the bakery’s namesake and co-owner. There are also lots of posters up advertising Deeks products as paleo.

The place was empty except for a couple sitting outside, and one woman sitting at a table next to the window. While we were there, there were a few take away customers but it wasn’t as busy as I expected at all. By the time we left a few more people had come in but not very many.

We took a long time deciding where to sit before we settled on the round old-fashioned table. There were two young staff members behind the counter and I asked for a high chair but unfortunately, they don’t have them.

There weren’t any printed menus either but there was a list of options painted on a chalkboard near the glass cabinet which Michael had a look over before telling me what he wanted. I knew what I wanted before I even got there though – I had my eye on the hazelnut wafer I’d seen on Facebook on Thursday.

I headed up to the counter and ordered, which is when disaster struck – I asked for the hazelnut wafer and was told it had been discontinued until further notice! This was pretty crappy. Less than 72 hours earlier, they had been advertising something that wasn’t available anymore. Disappointed, I ordered a regular flat white and apple slice for Michael, a babycino and a lamington for Milly, and a decaf flat white and caramel slice for myself, totalling $24.10.

Considering the place was basically empty when we arrived, our food and coffee order was slow and messy. The coffee took ages, and I had to go back to the counter twice because they hadn’t brought over the apple slice or babycino!

Having said this, the staff were really nice and apologetic about the missed items. The two staff members looked like teenagers and seemed like they hadn’t quite woken up after a big night, but they were friendly and happy to chat. I had a conversation with a staff member about the Deeks Bakery in Fyshwick, where everything is made before it gets bought over to the Pearce shop for sale every day.

They also had a look for some info about the ingredients used in the caramel slice (although she couldn’t find any details) and we had a little chat about the food philosophy at Deeks and the almost complete paleo food available.

Although the experience at Deeks was on the weird side, the food itself was good once it had all arrived.

Milly’s lamington had firm, sweet cake coated in chocolate and coconut. The coconut flavour was very strong and it was enjoyable. Michael’s apple slice was good too with delicious pastry that was not too dry or flaky. The apple filling had nice big pieces of apple in it and tasted like cinnamon. Michael said that if he didn’t know the apple slice was gluten free, he wouldn’t have been able to tell – almost unheard of for gluten free pastry! 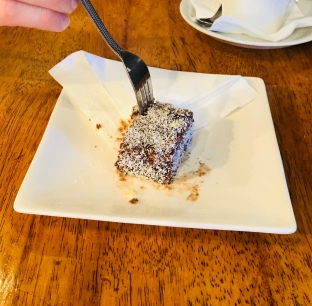 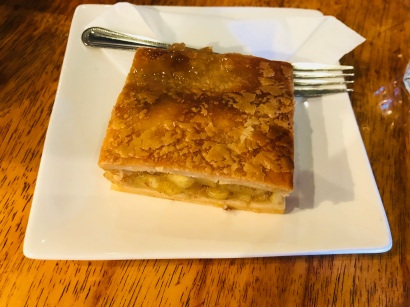 The caramel slice was one of the best I’ve had – gluten free or not! It had a nice chewy base to it that was moist and firm. The caramel was exceptional, not too sweet or too rich. I usually struggle to finish caramel slices because they become sickly but this one wasn’t like that at all. I could’ve eaten another one!

Before leaving, we decided to pick up some of the savoury items to take home for lunch. We got a chicken curry pie, a beef and bacon pie, and a sausage roll. These came to $17.70 all up. We heated these up in the oven for lunch when we got home and all three were great!

Although the pies looked a bit pale, the pastry was chewy and didn’t crumble like most gluten free pastry. The pie filling was delicious, with some good-sized pieces of meat and thick, tasty gravy. The sausage roll had the same yummy pastry with some sesame seeds sprinkled on top and the meat was well seasoned.

A trio of meat in pastry!

Overall, the Deeks Bakery and Café was a weird experience. The food is definitely good but the place itself is a mish mash of styles. It feels like it can’t decide what it is – a café, a bakery or a shop front?

The layout of Deeks implies it is a café but it’s in a really weird spot in Pearce, and it’s not particularly inviting. Despite all the great Deeks breads and products, they don’t have a menu or produce any food on site. I feel this is a bit of a missed opportunity to showcase the products, though Deeks bread is used as the gluten free option in quite a few cafes around town.

The Deeks baked food is good and if it was closer to home, I’d shop there regularly. If I’m in the area, I’d definitely drop in for take away but probably not to eat in.