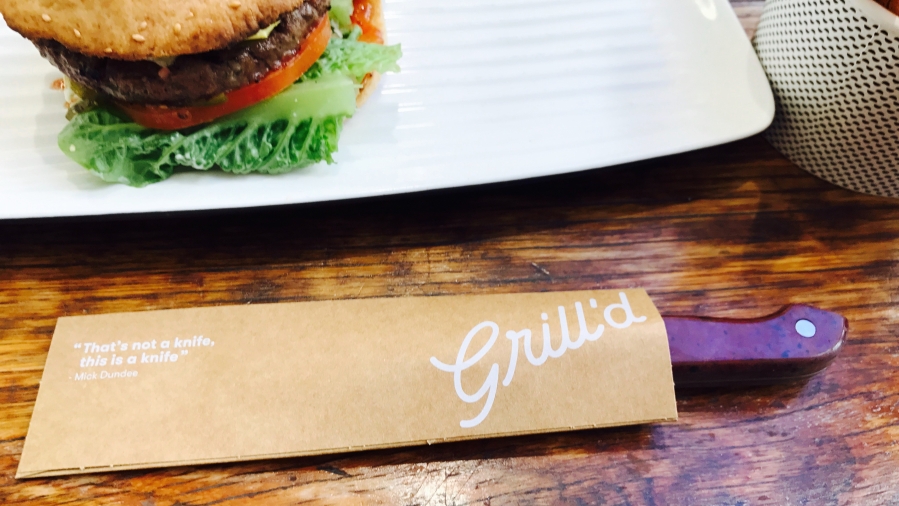 Sometimes, when I’m hungry and tired and just want something to eat, I would literally kill for a big mac. Incidentally there are three gluten free Coeliac Australia accredited McCafes in NSW although the burgers aren’t on the menu. As good as this is though, it doesn’t help me out when I’m hungry and out and about.

When I’m at the mall, it can be difficult to find something gluten free, convenient and reasonably priced. In most cafes and restaurants in malls, I don’t feel confident that the staff have a good enough knowledge of coeliac requirements, particularly cross contamination, so I tend to rely on the same few choices – sushi (without soy sauce), Mexican (with corn tortillas), or Indian food (no delicious naan bread of course).

That’s why I’m so happy to have found a reasonable burger chain to satisfy my need for meat, cheese, pickles and lettuce between a gluten free roll!

There are four Grill’d stores in Canberra – Woden, Manuka, Civic and Belconnen. On Saturday, I was in the Belconnen mall around lunchtime so Michael, a sleeping Milly and I stopped at Grill’d for something quick and easy to eat.

I’ve eaten at this Grill’d twice before without any problems and was comfortable returning. On the last two occasions, I’d eaten the Simply Grill’d burger and Crispy Bacon and Cheese burger with Famous Grill’d Chips. It doesn’t seem like much but it’s a big deal to find somewhere that does chips that are gluten free. Most places share oil with other items that contain gluten so cross contamination is an issue and I often have to go without the chips (but still have to pay for them)!

The restaurant itself is modern and trendy looking. The till is next to the open kitchen so that if you sit inside you can watch staff putting your burger together. There’s a lot of wood and on the back wall there’s some burger related wall art – or Grill’d propaganda as I like to think of it.

There’s also seating outside in a small covered courtyard area, as well as seating in the atrium next to Target where we sat. We arrived around 11.45am and there were a few empty tables, but by 12.15pm it was busy and there weren’t many tables left.

The menu is pretty extensive with beef, chicken, lamb and veggie burger options as well as sliders, salads and chips. At the bottom of menu, there’s a tiny gluten disclaimer. In fact, the whole menu refers to ‘gluten-friendly’ items and the disclaimer states that ‘Our Gluten-friendly options are suitable for people with a non-Coeliac gluten sensitivity’. Despite this though, the staff have always seemed on the ball with coeliac requirements and cross contamination – I don’t know if other Grill’d restaurants are as good.

We’d bought lunch for Milly from home and she was sleeping in the pram when we arrived so I ordered up at the counter for Michael and myself. I ordered the HotBird burger on a panini for Michael without red onion and a Pepsi Max, and I had the Mustard and Pickled burger on a gluten free bun with a bottle of water. We also had the regular Famous Grill’d Chips to share. This came to $32.00, including the gluten free bun for an extra $1.50.

When I ordered, I told the man at the checkout that I was coeliac and he asked if I wanted the gluten free or low carb superbun. He didn’t bat an eyelid and confirmed the burger would be prepared separately. He was friendly and efficient. They also provided me with tokens for their Local Matters scheme. This is their program where every month they donate $500 to groups and programs in the community.

The food came in about fifteen minutes. As per the laws of parenting, Milly woke up as soon as we started to eat. Fortunately, Grill’d has heaps of high chairs so we were able to pop her in one of those and she was quite entertained munching on crackers and watching all the people going past. There’s also a good parent’s room on the floor below.

In addition to this, she had a range of things on the table to try and play with. Once the food had been brought over, there was no space on the table with the jug of cutlery, various flyers and menu stands. We ended up moving everything off the table except the food and putting it on the spare chair we had at the table.

Michael’s HotBird was a piece of chicken breast with jalapenos, roasted capsicum, sour cream, cheese, lettuce and chilli relish. It could also be made gluten free. It needs to bepointed out that Michael had a bit of a cold and his sense of taste was a bit off. He said the burger was ok, but a little spicier than he liked, and it needed something to add some sweetness.

My Mustard and Pickled burger was a beef burger with Dijon mustard, pickle, cheese, tomato, lettuce, red onion and tomato relish. It was a pretty good burger and there was a lot of filling. It didn’t seem like it was overfilled, but the burger didn’t maintain its structural integrity and fell apart towards the end!

The gluten free burger bun was mixed. It tasted good with a slightly buttery flavour. It was toasted and started off crusty on the outside and soft on the inside. Unfortunately, though, over the course of the meal, the burger bun became soggier and soggier and the second half of the burger completely fell apart! It was delicious but very, very messy.

The beef patty was beefy and tasty, and the lettuce and tomato were fresh and crisp. There was a good amount of mustard which was yummy and I didn’t find it overpowering. The pickles were good too but they were a little overwhelmed by the other ingredients so it could’ve done with a little extra.

There was a good amount of cheese in the burger but it sweated in the bun rather than melting. Even though burger wasn’t hot enough to melt the cheese, I wouldn’t say it wasn’t noticeably cold when it arrived.

One of the best things about eating at Grill’d is the tomato relish. It’s sweet with little chunks of tomato and onion in it. It complemented the pickle and cut through the hotness of the mustard nicely. I also got a little pot of it to dip the chips in. The chips were hot, and are salted and herbed. They’re thick cut and quite yummy.

Altogether the Mustard and Pickled burger was pretty good and I feel comfortable eating at Grill’d Belconnen. Accommodating coeliacs doesn’t seem to be an issue for the staff who were brisk but friendly. It’s a great option for a quick, fresh meal while out shopping.