This is a REALLY late post! Unfortunately, I’ve had a few very busy months and I haven’t been able to write as much as I’d like! I’m hoping to post a bit more frequently now that everything’s calmed down a bit!

On New Year’s Day we spent a fun hour at the Canberra Reptile Zoo (which I wholly recommend) before heading to lunch at the George Harcourt Inn. I’ve been to the George a few times, and had mixed experiences with the food – I’ve never been gluten’d but the quality is always a bit up and down!

We arrived early at around 11.45am and the place was busy already. There were quite a few families with small children having lunch and outside there was a crowd of men and women setting up for what looked like a wood chopping competition in an area cordoned off next to the stage.

The outdoor area is really nice, it’s spacious and has plenty of seating. The picnic style tables have sun umbrellas so there’s some shade, and there’s some trees and grass on the upper level for children to run around. The pub is a nice-looking building. Although it was built in the 1980s, it’s in a Ye Olde English style with white walls and black trim.

As it was so hot and Michael’s allergies were playing up, we opted to sit inside. The pub always feels comfortable and familiar for me straight away. It has the look and feel of a large English village pub. The bar is long and visually busy with various beers on tap (none gluten free as far as I know though), posters behind the bar, and glasses hanging from the roof. To the right of the bar there is a kitchen hatch where you collect food and heaps of seating, which opens into a large, sunny gazebo. To the left is a small square area with more seating, including some booths, and a fireplace. There are posters and pictures on every wall, as well as knickknacks hanging from the ceiling like old trumpets and chamber pots. 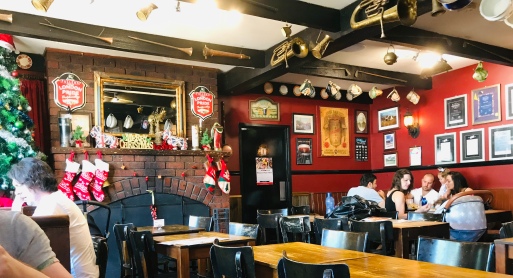 The gazebo through the doors

A lot of the tables were reserved so we opted to sit at a table in one of the booths near the fireplace. On Tuesdays, the Harcourt offers $15 steak and schnitzels. After I had a look over the menu, which didn’t have a huge range of options, I decided I’d go for a steak while Michael went for the schnitzel. I headed up to the bar to order.

The woman at the bar was really friendly and when I explained my coeliac requirements, particularly around cross contamination, she said she’d double check with the kitchen to confirm. Unfortunately, when she was speaking to the kitchen staff, she was told that the steaks were not prepared yet. Disappointed, I asked about the chili beef nachos. She confirmed the nachos were gluten free and I went ahead and ordered – $15 chicken schnitzel and a coke for Michael, chili beef nachos and lemonade for me. I got a soda water for Milly and we shared our mains with her.

After a short wait our food came out. Michael’s chicken schnitzel looked pretty good -obviously not gluten free though! Michael said the schnitzel was nice but a bit greasy and that it was standard pub food.

When the nachos came out there was a mountain of food. I realised afterwards that I’d ordered a sharing plate, and there was definitely enough to serve at least two. The beef and bean chilli was slightly sweet with a very gentle spiciness. In fact, in the first mouthful the chilli was undetectable but the effect was cumulative and the more I ate, the stronger the chilli became. By the time I’d finished eating, my mouth was hot but not uncomfortable.

The nachos were salty and crunchy with a generous helping of melted cheese. The corn and tomato salsa helped to cut through the saltiness, and provided a fresh flavour to the dish, and the smashed avocado was livened up with a little coriander. This was all topped off with a blob of sour cream which I feel they could’ve been a bit more generous with. The overall effect of the food was salty though!

The total price for the two plates and two soft drinks came to $43 – a bit steep for what it was as the quality wasn’t great. I’d recommend the George for a drink on a sunny afternoon but I’d think twice about the food. I didn’t have any gluten reaction but I feel the food is a bit overpriced – unless you can score yourself a $15 steak!