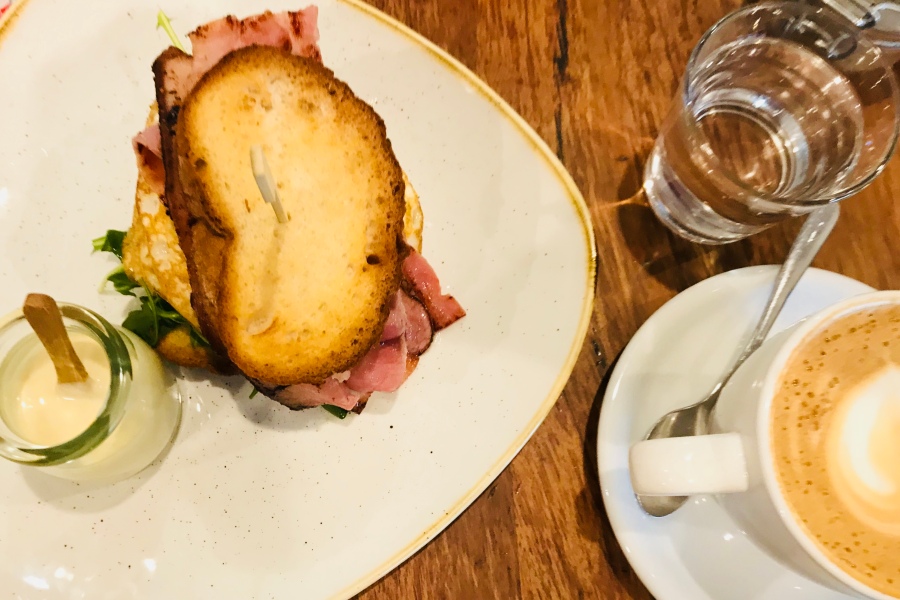 We drove into Fyshwick on Saturday morning to shop for furniture for the baby’s room and ended up getting brunch at Coffee House! Coffee House is one of the ONA roastery cafés wedged between Canberra’s classy fireworks and explosive prostitutes.

The parking in the area is pretty bad. We parked at a furniture shop next to Coffee House, had a browse then headed inside for coffee. The entrance is up a steep driveway and there’s some outdoor seating to the right near the entrance as well as covered outdoor seating that you access through the café. 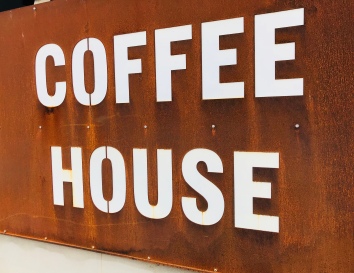 The entrance to the cafe

Inside the space is well done. The style is casual industrial, a bit like a classy Ikea. The floor is polished cement and there are lots of shelves that cut the space up into smaller pockets for privacy. It feels nice and open and there are plants dotted about. You can see into the kitchen through the service window and at the back of the space there’s a big window looking into the coffee roasting area.

When we entered the café it was pretty busy and I initially thought we wouldn’t get a table but a staff member approached us, asked how many of us there were and pointed out a table next to the kitchen and roastery. As we sat, she offered to get us a high chair for the baby and dropped off some menus.

Coffee House has the regular food menu, a specials menu and a coffee menu. There were a good range of gluten free options which were marked with a GF, or GFO. When the staff member returned to take our order, I explained my dietary requirements as usual and she was great. In addition to being really friendly, she knew what she was talking about. She confirmed the gluten free items on the menu, and said the kitchen were all on board with cross contamination and would prepare toast separately.

Some of the decor

I ordered the ONA roll, an egg and bacon roll, with cheddar and barbeque sauce. She said she’d run it by the chef when she passed on the order to make sure it was all coeliac safe. She came back after a brief discussion apologising as the barbeque sauce was not gluten free, and suggested the aioli and rocket as the gluten free alternative. I went ahead with this option and Michael ordered the speck and white bean cassoulet. We also order mugs of coffee, I had the Black Betty and Michael went for the Founder, plus a babycino for our hipster tot!

After a short wait our coffee arrived, followed by the food. My coffee was quite nice but while it was good, it was probably the weakest link when compared to the food! Michael’s speck and white bean cassoulet came with a crusty baguette which he immediately dipped into the cassoulet, however I was told by the staff afterwards that it was gluten free and if I’d been faster, I could’ve nabbed some of it before it was contaminated.

The cassoulet contained speck, white beans, chorizo, artichokes and brussel sprouts with a poached egg on top and bone marrow butter to go on the baguette. Michael said it was very nice but would’ve been even better if the speck was slightly saltier. The brussel sprouts also weren’t mentioned on the menu – they clearly tried to sneak them in like a granny at Christmas.

My ONA roll was great! It came over and it was huge, a tower of bacon and fried eggs plus rocket (to make it healthy)! There was heaps of bacon which was not too salty and a bit smoky. There were two fried eggs with hard yolks that were perfectly cooked and the bread was nice and soft. They used the La Bakehouse Exquisite bread, which is always nice. There was also a little pot of aioli on the side that really added a creamy, garlic pop of flavour. It was very good, cutting through the greasiness of the fried foods and rounding the sandwich out.

Altogether our food and coffee cost $48. This included a 10% weekend surcharge, which I find a bit weird but I was happy to pay because the service was really great. I don’t know if we’d head out to Fyshwick just for brunch but we’ll definitely come back if we’re in the area.