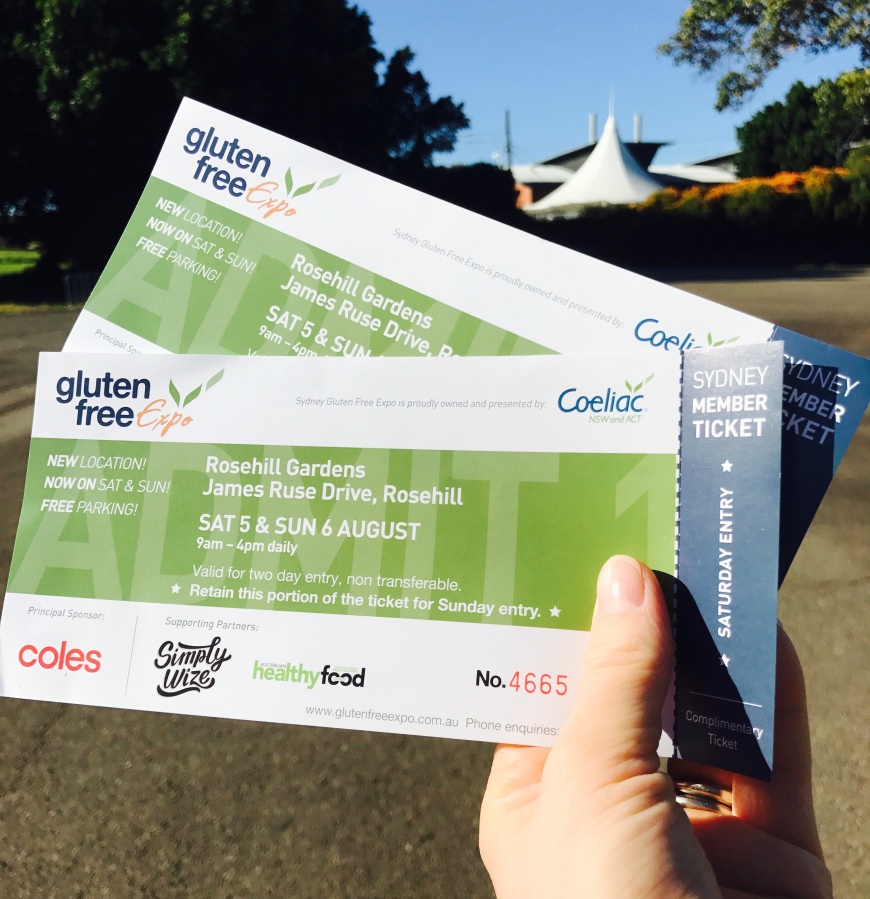 The first weekend in August, I packed up the family and we drove to Parramatta for the 2017 Sydney Gluten Free Expo. Held at the Rosehill Gardens, the expo was a two-day extravaganza of gluten free food, drink and information!

We were staying at the Rydges Parramatta and woke up early on Saturday morning. While the baby breakfasted on Weetbix, Michael and I held out, planning to gorge on gluten free goodies at the Expo. From the hotel, it was a brief 15-minute walk on a lovely, warm day. We sauntered over to the venue, arriving at the doors at 9.45am, and there was already a healthy crowd of people meandering into the venue.

The first thing we did was pick up a show bag at the door. The show bag contained a few interesting nibbles and freebies like the Freedom Foods dark berries and cacao bar (yum), Kellogg’s gluten free cornflakes (crunchy), and Simply Wize BBQ corn crunch (weird), as well as discount vouchers for Coles and some flyers.

There were rows and rows of stands covering everything from food and products, to Coeliac information and research studies, as well as two stages – the Genius Gluten Free stage and the Coles stage.

When we entered, we went straight to the Bob’s Red Mill stand and started sampling the goods, eventually buying one bag of bread mix, one of cookie mix, and one bag of multigrain porridge.  Over the course of the day we tried a little something from every stall – steamed dumplings by Palmira Gluten Free, beer from O’Brien Beer, bread from the Gluten Free Bakehouse, and pudding at Itha’s Puddings and Gourmet Foods.

The crowd at the Gluten Free Bakehouse

At the Genius Gluten Free stage, there were various speakers and I sat for a while and listened to Penny Dellsperger, a dietician and the Coeliac Australia Technical Officer, explaining how to read food labels. This was really interesting and super helpful to anyone newly diagnosed, as well as a good refresher for us old hats!

Halfway around the room, we decided we needed coffee and headed outside into the beautiful sunshine to the food vans.  This was the first year the expo had an outdoor food area and it was next to the racetrack. The kids’ corner was also situated outside but most importantly this is where the donut van was!

It has been well over three years since I last ate a fresh donut so while Michael joined the coffee van queue, I got in line for the donuts. After ten minutes queueing, I ordered two donuts for $5 and was told that there was a 30-minute wait.

Michael, Milly and I sat on the grass near the food vans while we waited. There was a wait for coffee too, so we played, relaxed, and chatted in the sun. Michael took Milly to the Kids Corner and found her a balloon which was a huge hit and after 45 minutes, the coffee and donuts were ready. 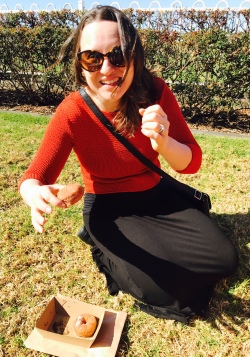 My first donut in over 2 years

I can’t begin to tell you how good the donuts were. Fresh, hot and coated in cinnamon sugar, they were dough-y and delicious and well worth the long wait! They were made by the GF Dessert Co. The coffee was made by Sip Happens Café and it was the perfect accompaniment to wash all the sugary yumminess down! Hopefully next year they both have two vans to get the wait time down.

After the donuts and coffee, we figured it’d be rude not to try one of the sausages made by the Sausage Factory. I ordered the ‘bare naked lady’ for $13, and waited another 45 minutes! The sausage took a long time, not because of the demand but because they weren’t very well organised – when it eventually came, it was delicious though.

While waiting for our food, we chatted with some of the other attendees.  One attendee told me about the gluten free donuts her son-in-law used to bring her from New Zealand, and that that this was the first time the expo had food vans. Another couple told me all about their search for the best gluten free bread mix (suggesting FG Roberts), brewing gluten free beer by the keg, and finding the right pasta!

After our break, we headed back inside to finish doing the rounds of the venue, checking out the Genius Gluten Free stand and buying four packs of their pitta bread (which Coles in Canberra stopped selling!), trying (and buying) the Yes You Can gluten free and salt reduced apple and cinnamon muffin mix, and sampling the bliss balls by Carman’s Fine Foods!

But one of the best things about the expo was the Deeks stand – it’s always good to see Canberra represent! I had a lovely conversation with Ingrid, the Deeks sales representative, sampled some breads and was gifted a fruit log and banana bread (product reviews to come)!

I also had a chat with the people at the Coeliac NSW and ACT stand, and the Coeliac Australia Endorsement stand before heading to the Coles stage to watch Michael and Courtney from Masterchef cook up some beef and fetta meatballs with tomato sugo. Of course, I couldn’t go without sampling a little bit and they were yum!

Before leaving the expo, we took 20 minutes to take part in a research project by Macquarie University. The study is looking at the genetic basis of coeliac disease and we filled in a short questionnaire before filling a vial with spit!

3 Things I learned at the Sydney Gluten Free Expo 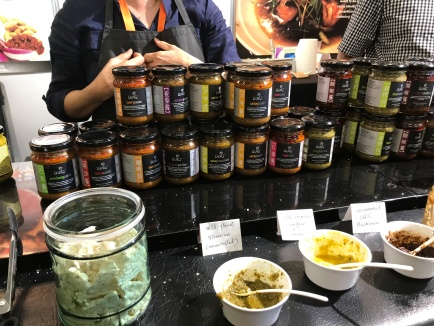 The gluten free expo was a great day out for the whole family and was well worth the trip up from Canberra. I’ll definitely be attending again and taking a trolley with me for all the gluten free goodies!

One thought on “The 2017 Sydney Gluten Free Expo”