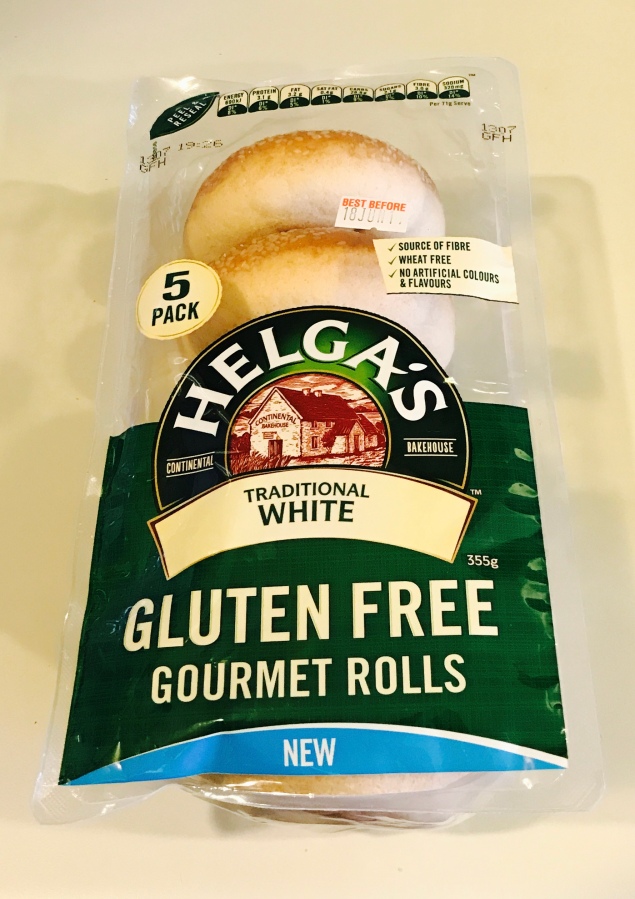 After my operation, I’ve been relaxing and recuperating while my marvellous husband, Michael has been looking after me and the baby. On Friday, he rustled up a ham salad roll for me using the Helga’s Traditional White Gluten Free Gourmet Rolls.

The Helga’s Gluten Free rolls come in traditional white and 5 seeds. They’re endorsed by Coeliac Australia and according to the Helga’s website, they taste so good, you’ll never know they’re gluten free. I have to say I disagree though. I knew I was eating gluten free rolls because of the taste. And the texture.

Michael bought a packet of 5 rolls from Woolworths in Gungahlin costing $6.99. They’re also available on the Coles website for $7 a packet. We opened them two days after buying them to have fresh for lunch.

The white rolls are about 10cm wide, round and coated on top with sesame seeds. After cutting the first roll in half, the texture seemed pretty dense and dry so we popped it into the microwaved for 10 seconds to soften it up.

Michael constructed the roll for me with some gluten free ham, sliced tomato, spinach leaves and a scrape of mustard, and made a lifesaving cup of tea. Since moving to gluten free bread, I’ve learnt never to eat it without a drink – gluten free bread is so dry you need something to wash the crumbs away and rehydrate your mouth!

The Helga’s bread rolls were not unlike the other gluten free rolls I’ve eaten. They were quite dry, although not as dry as some other brands I’ve had. Worse than the dryness though was the complete lack of taste – they were completely flavourless. They tasted of nothing at all, I couldn’t even taste the sesame seeds on top!

This time I had the roll toasted with cream cheese and ham, and it was much nicer. Although toasting didn’t affect the flavour, it made the dryness easier to deal with. Once toasted, the consistency was like a bagel but with a softer texture and less dense.

The Helga’s traditional white rolls are nutritionally not too bad. Gluten free bread is usually low in fibre and high in sugar and salt, this obviously varies depending on the brand though. The Helga’s rolls were fairly low in fibre and a bit high in salt although the sugar is a not too bad. The 5 seeds rolls contain the same amount of fibre (3g per serve) and less salt but more sugar. This doesn’t seem great but compared to the Baker’s Delight white round roll, they’re actually better for fibre and salt.

The Helga’s rolls were pretty average and I think they’re stretching the definition of ‘gourmet’ significantly! If you really want a bagel but can’t get them, these rolls are a good alternative when toasted but I won’t buy them again to eat fresh because they’re too dry and tasteless.

Welcome to Get Behind Me Gluten! You’ll find a range of topics on this blog regarding coeliac disease for your entertainment – info, research news, restaurant and product reviews! Comments are always appreciated so leave a message if you have any feedback!
%d bloggers like this: