This week my coeliac adventures took me into the unknown… Like Frodo and Samwise venturing to Mount Doom, the family and I journeyed from the safety of North Canberra into Mordor… I mean Queanbeyan! After moving to Canberra I’ve always lived on the north side and rarely ventured too far past Civic. When the family was invited to an engagement in Queanbeyan, it seemed like a great opportunity to see what Queanbeyan had to offer. Queanbeyan is quite different to Canberra. You can tell you’re in New South Wales and not in the ACT – the houses are different, it feels like regional Australia and it was quite green compared to the oranges, reds and browns of Canberra in late autumn. It was quite lovely and nothing like Mount Doom!

After a quick google search, we decided to try Riverbank of Queanbeyan. This is over the bridge from the main high street in Queanbeyan, on the east side of the river. You can see it as you drive over the bridge but it is quite confusing to drive to. From the bridge, you have to take a couple of lefts around a motel and you’ll end up next to a children’s park. Walk past the park (which has a huge snail sculpture) and you’ll reach the café.

Riverbank is unique-looking. The main building looks like a shipping container that’s been renovated and inside there are arts and trinkets for sale. There was a cabinet containing a variety of cakes inside and two of these were marked wheat free. I’m not sure if these were gluten free and they were next to gluten containing cakes. Facing the park is a patio area set up with tables and covered in grapevine. Unfortunately, this is also facing the toilets but it’s still quite a nice spot. On the other side, there is an enclosed patio, with windows that can be pulled open in good weather and there is a deck looking out onto the river. It’s a lovely spot with a great view. We sat in the enclosed patio area as it was a bit too cold on the deck to sit with the baby. There were heaters set up in this area for the colder days but we didn’t need them. 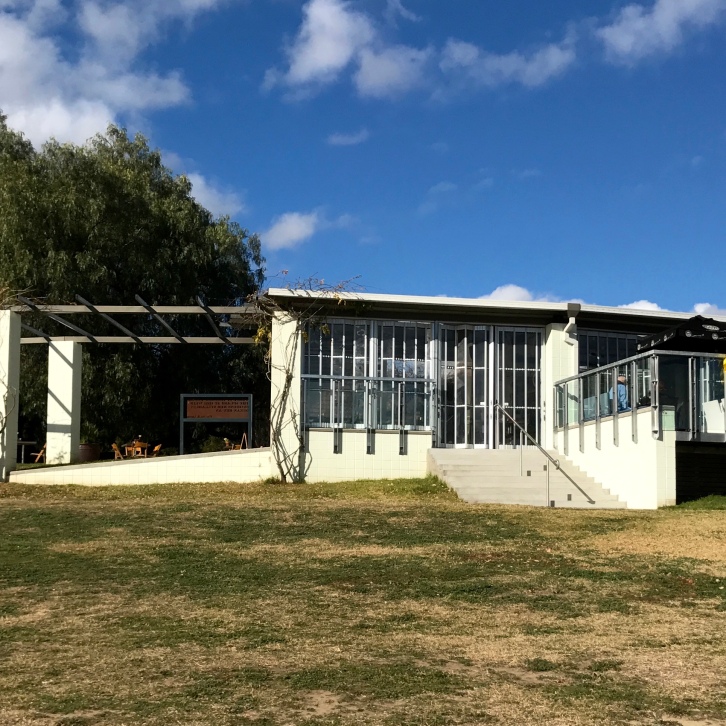 View from the river

View from the patio 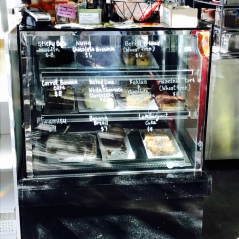 Cakes in the main building

There were a few people at the café when we arrived and there was a staff member setting up. He suggested we sit inside as it was a bit warmer for the baby. The staff were all friendly however the main staff member who served us was a bit intense. He was warm and chatty but also a little overbearing. I know more about him than I need to! It took a long time to make our orders because he talked a bit too much. His knowledge of the menu and adjustments that could be made for coeliac suitable food was exceptional though.

The menu itself was extensive. Michael stated that it reminded him of an Italian café in the early 90’s – written in comic sans and six pages long! The breakfast included options like French toast, muesli, buttermilk pancakes and eggs benedict. The staff member informed us all toast could be gluten free and toasted separately, the muesli was gluten free (I would check this before ordering though to ensure there aren’t any oats in it) and the buttermilk pancakes could be made with gluten free flour. The eggs benedict was pretty straight forward although there was an extra charge per item for spinach, ham, bacon and smoked salmon, making them a bit expensive.

The lunch menu looked pretty good too with the staff member telling us the majority of items could be gluten free including the beer-battered fish and chips. I would have made more enquiries about this but the staff member was so intense that I just wanted to order something and be left alone by this time!

Milly and Bruschetta without red onion for Michael. I ordered from the breakfast menu and had the Riverbank breakfast. This was eggs with wilted spinach, a roasted tomato, mushrooms and corn fritters on sourdough. I swapped the sourdough for gluten free toast and had hash browns in place of the corn fritters which were not gluten free.

When our coffees were bought over the staff member let us know he had spoken to the chef who had confirmed gluten free was not a problem for them and that he considered it to be ‘just cooking’. I liked this a lot because as I’ve said in previous posts (The Other C Word – Part Two), you can sometimes feel like you’re being difficult when you have dietary requirements.

The coffee wasn’t great. It looked like it had been made by pushing a button on a machine, rather than by a barista. My decaf had too much milk in it making the coffee flavour an aftertaste. It had also been heated a little too much and skinned over.

The food came out separately rather than all at once. There weren’t big gaps between each plate arriving but it felt slightly stilted. When the food arrived, the portions were generous. Milly’s slices of toast were huge and came with butter. They also smelt amazingly good and she gobbled them all up! Michael’s bruschetta also looked delicious and he said it was very tasty. It was made with ricotta, tomatoes, basil pesto and balsamic vinegar on a wedge of sourdough, served with a little salad. 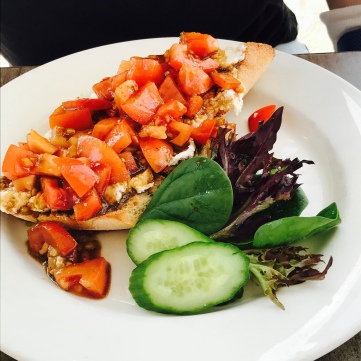 The breakfast was average though. It came out with bacon which I hadn’t requested but I’m glad I had it. The scrambled eggs had too much parsley in them and didn’t taste like eggs. There were a lot of mushrooms which had a very strong umami flavour. This was a bit overpowering to start although it grew on me the more I ate. I had two hash browns in the breakfast and while one was crispy and yum, the other was hidden under the scrambled egg and went soggy which was disappointing. The bacon saved it from being bad. It was yummy and there was plenty of it. The toast was strangely satisfying too, it looked like the Country Life-brand white loaf but it was nicely toasted and came on a separate plate so it stayed crisp.

I don’t know if I’d give Riverbank another go. It’s a beautiful spot and has so much potential and while it wasn’t terrible by any stretch, it was average. The staff knowledge about the menu and gluten free options was great but the balance between attentive and overbearing made me not want to ask too many questions. I certainly wouldn’t come here if I wanted a quiet coffee by myself. The food was hit and miss too, and while I might just have been unlucky with my order, it wasn’t cheap (costing $23.50). Overall the cost was reasonable though.

Welcome to Get Behind Me Gluten! You’ll find a range of topics on this blog regarding coeliac disease for your entertainment – info, research news, restaurant and product reviews! Comments are always appreciated so leave a message if you have any feedback!
Loading Comments...
Comment
×
<span>%d</span> bloggers like this: